Dr. Watins goes over great exercises to do when working from home.

My name is Dr. Michael Watins, today we’re going to go over a number of exercises that you can start to do at home. Exercise is a vital thing to do right now especially with COVID, especially with quarantine, and not being able to make it to a gym. It’s mandatory, very important for your health, that you start exercising on a regular, consistent basis. If you're watching this, I assume you’re a patient of mine, we’ve gotten you out of pain, chances are you’re getting a lot more mobility and it’s time to exercise. So, I’m going to start going through some exercises that you can do. Jay will show you some exercises that are great for you and things that you can incorporate at home.

He’s going to show us how to do a squat. It's a great exercise, also, that you can do at home. Basically, it’s straightforward, we all know how to do it, but it’s all actually a lot more complex than people think. So, Jay, give us some basic information or basic ways on how to go about doing it. When you squat and you go down, Jay, what’s the first thing that you’re actually paying attention to?

The feet have to be on the floor. You’re not raising them up.  You’re not lifting it in the heels. When you go down, the second thing that you want to pay attention to is the knees.  You don’t want the knees to go past the front of the foot. The more the knees go forward, the more stress you tend to put on your knees, so you want to keep the knees back a little bit. The more the knees are back, more over the ankle, the better the line of force, the less stress you’re putting on your joints, the better it’s going to be. Ideally, you should be able to go down about 90 degrees, once you get down to about 90 degrees that’s usually good enough.

Jay, do me a favor, just stand lateral so they can see the side view of you. So, when Jay’s doing it this way, look at where his knee is relative to the foot, it’s kind of staying on top of the foot, and that’s the way it’s supposed to be. Jay, can you show us how not to do it? Sometimes it’s really easy if you can do that, like see how much his knee is going out now? You probably feel a lot of stress on the knee when you do that, right?

The exercise, now that Jay’s going to go through, is called Haloff's exercise and it’s a great core stabilization exercise. It actually hits the shoulders, it hits the core, it hits the hips, it really is a great general body, upper body strengthening exercise. It’s probably one of the top five core exercises that someone can do. There’s a couple of ways of doing this.  If you see, he’s kind of rotating his arms a little bit.  That’s one way. You can also...Jay, just try pushing the arms forward and backwards...and that’s another way of doing it.  Then, you can even do that or you can even angle the arms upward to the corner of the room up to the ceiling. Like this, Jay.  This one is a good one. And so you can hit a lot of different angles when you’re doing this, and what it will do is really hit and give a lot more stability for your upper back and your shoulder, as well as the core.

And now essentially what we have is a pulley that we can do our exercises with. The exercise that Jay is showing you now is called a row.  It’s great for strengthening the muscles between your shoulder blades.  Specifically, it strengthens the rhomboids, the shoulders, the upper back, and it gives stability and helps reduce neck and shoulder tension. And if you look at the way Jay is doing it, his arm is going forward and his palm is going forward-downward, and when he does that, he’s strengthening the area between the shoulder blades. You hold it for about 30 seconds.

Then from there, you’re going to put your hands above you, so come on up, Jay. And what you’re doing if you notice his hips are not on his heels, the reason why they’re not on his heels is you want your hip muscles engaged. You also want to try to stick your arm back out a little bit so you get a nice arch into it and that engages the back stabilization muscles, and then your hands are going above your head and by doing that you’re getting a really good stretch. Working on flexibility is a very good functional exercise, it’s going to also build up some core stability and this is something you should be doing and you can hold it for 3 sets with 30 seconds each.

Chops are a great exercise, a great exercise for your core, build stability. The stronger your core is, the less stress you’re going to put on the back, the better your back will be.  It also helps in terms of neck and shoulder stability. And if you look at the way Jay’s doing it right now, his hips aren’t really moving much, so his motion is coming from the core and from his upper body. And what you’re going to do is you’re going to try to shoot for 3 sets of 30 on this.  It’ll start to engage those core muscles, build up some stability. It’s a great exercise that you can do at home, all from your house.  All you need is a TheraBand and the doorknob and one door and you’re pretty much all set.

Jay’s going to show you how to do a tríceps exercise.  It’s another great exercise that you can do from home. Basically, you put the TheraBand on top of the door, just the way he did, and now it’s going to be nice and stable. And then if you look at him you can see how he’s bringing his arms down and by doing that he’s going to start strengthening the tríceps. And the goal should be to try to do 3 sets of 30. We want to start getting our muscles working, build up some strength. And so what you’re going to do is you’re going to put that on top of the door.  Now it should be nice and stable.  Now he goes down on one knee and he’s going to basically pull down so he’s doing almost like a lat pull down that you’d be doing at a gym. And be careful when you’re doing this that your form is good, that your head is looking straight ahead, and you’re making a neutral posture.  When you do that, you’re going to start engaging your lats, which is one of your back muscles, and it’s just an easy way of getting a workout at home without actually going to a gym. It’s just another exercise that you can do to help strengthen your upper body.

Shoulder press is a great exercise also, to help strengthen the shoulder. Jay’s showing you how to do it, he basically stood on top of the TheraBand and he’s pushing the band up to the ceiling, that helps strengthen the shoulder muscles. If you notice, he starts with his arm in front of him. By doing that it takes a lot of tension off the shoulder, it’s a smooth emotion. And then as the arm goes up, he starts to rotate it externally, when he rotates it, it makes it less stress on the shoulder, it’s a more comfortable motion, less irritation on the shoulder muscles and yet it still strengthens. It’s a much better exercise for most people with neck problems, than to bring it off laterally.

Jay, can you just show us how to do it laterally, the way that we actually promote shoulder tension. So, when you do it the way he’s doing it now, it probably feels a little tighter. Jay, does it feel a little less smooth? It’s just like, not the most comfortable motion relative to the other, so we like to modify the lift to compensate and take tension off the neck and shoulder. Jay’s going to show you how to do another TheraBand exercise, it’s a lateral raise. Basically, you put the band on the floor and you stand on it, and then what you do is you’re going to bring your arms laterally up to the side and then bring it down again, and you’re going to repeat that. Really try 3 sets of 15 if you can, it’ll help stabilize the shoulder and strengthen the lateral muscles of the shoulder, it’s another great exercise that you can do at home. The more you start doing these exercises, the stronger you’ll start to get, the better your health will be, then the better you’ll do over time.

The exercise now that we’re going to do that’s also really good for the quadratus lumborum, it’s a great stretch for that, it also stretches out the hip flexors and also by getting motion in the spine, it pulls fluid into the disc which also helps make the disc a little bit healthier. This is a great exercise that you should be doing. Jay, if you can go into a lunge position, and when you do this you want to keep your feet pointing forward, you also want to keep your hips pointing forward, and then what you do is you put your hands above your head, and now you’ve done that, arch your back as much as it goes, like try to extend all the way and then bend a little bit to your upper leg. So Jay, you’re going to start bending to your right side just a little bit, you’re not going to bend too far because you’ve already taken all the range of motion out with extension, and so the range of motion is going to be limited but it’s going to hit the quadratus lumborum, it’s going to hit effect and stretch out the hip flexors. It’s a great exercise for the low back and to take stress off it, especially when you’re at a desk sitting all day. 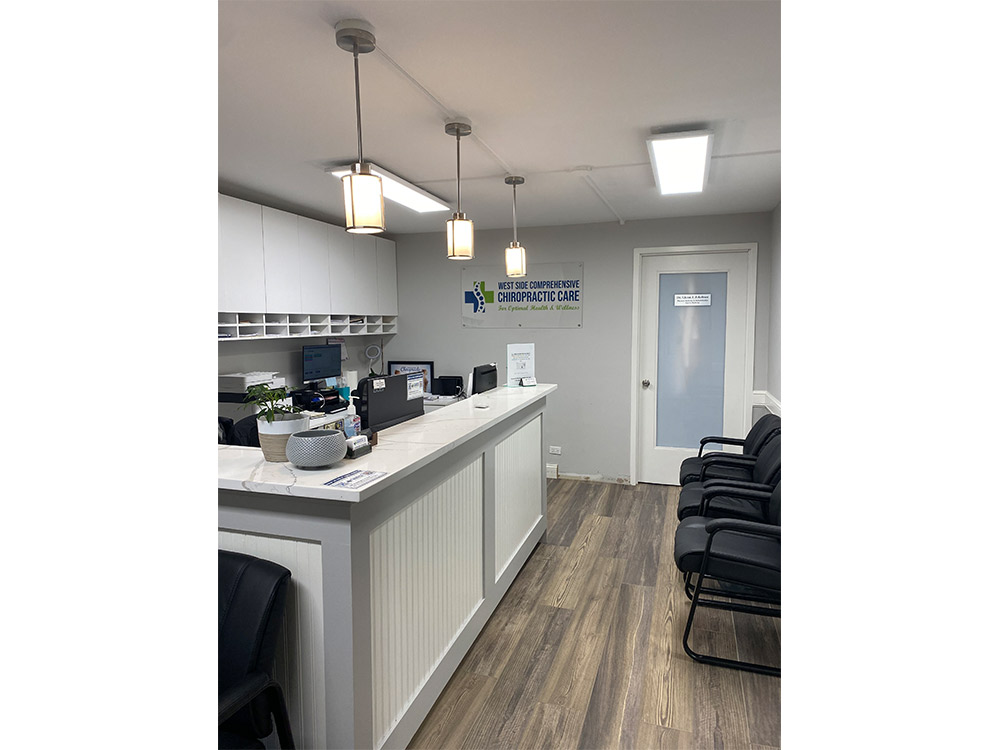 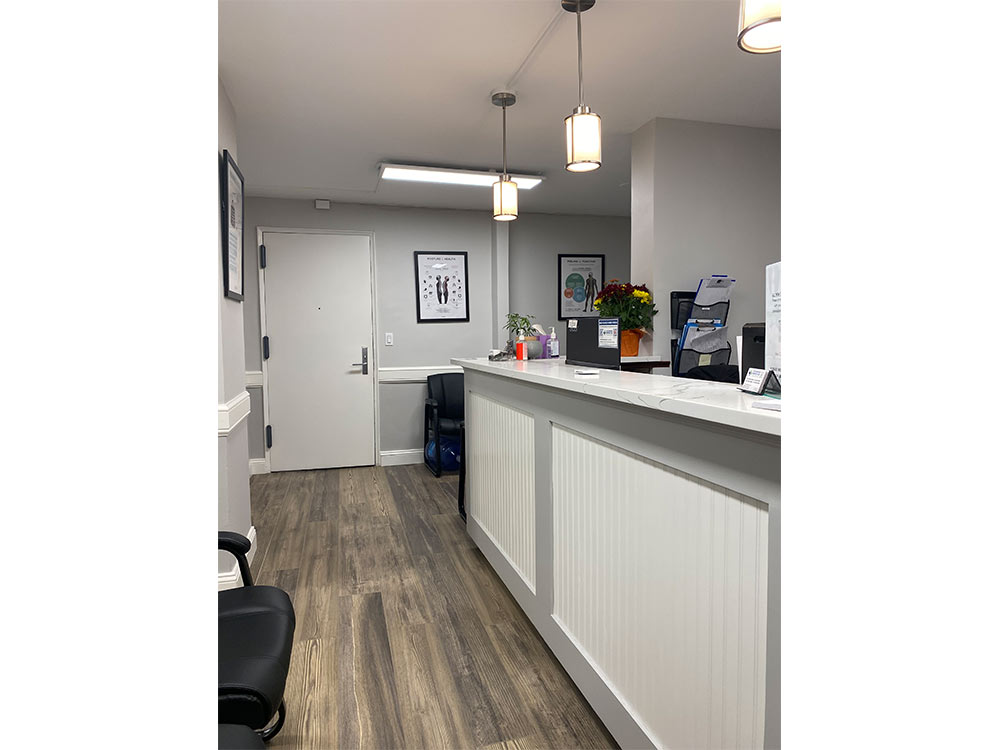 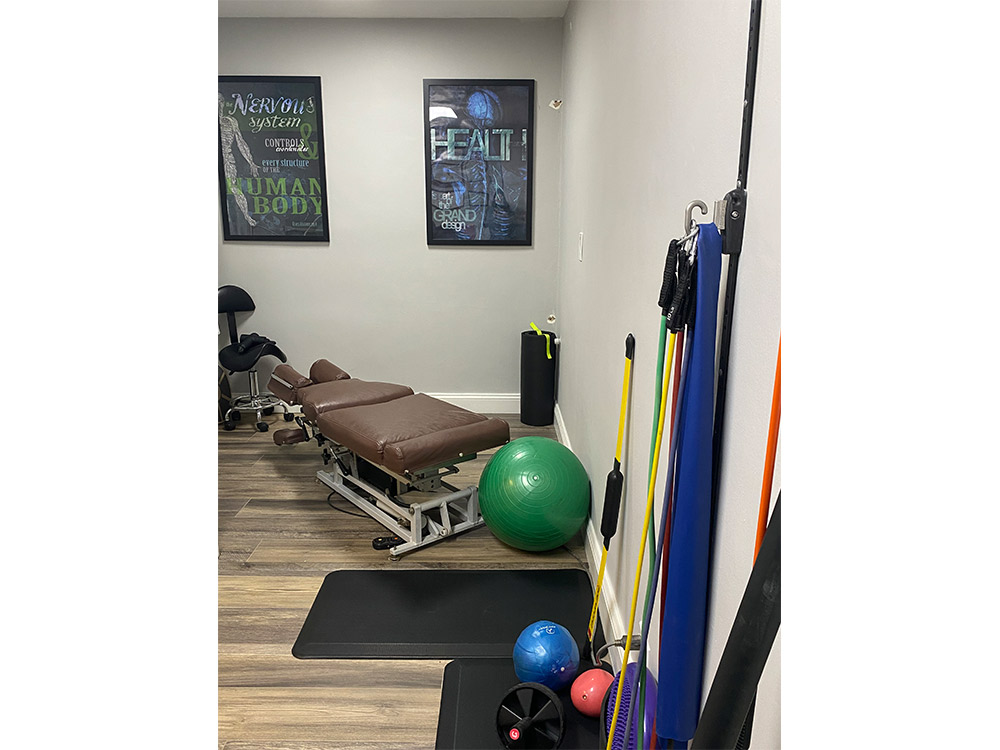 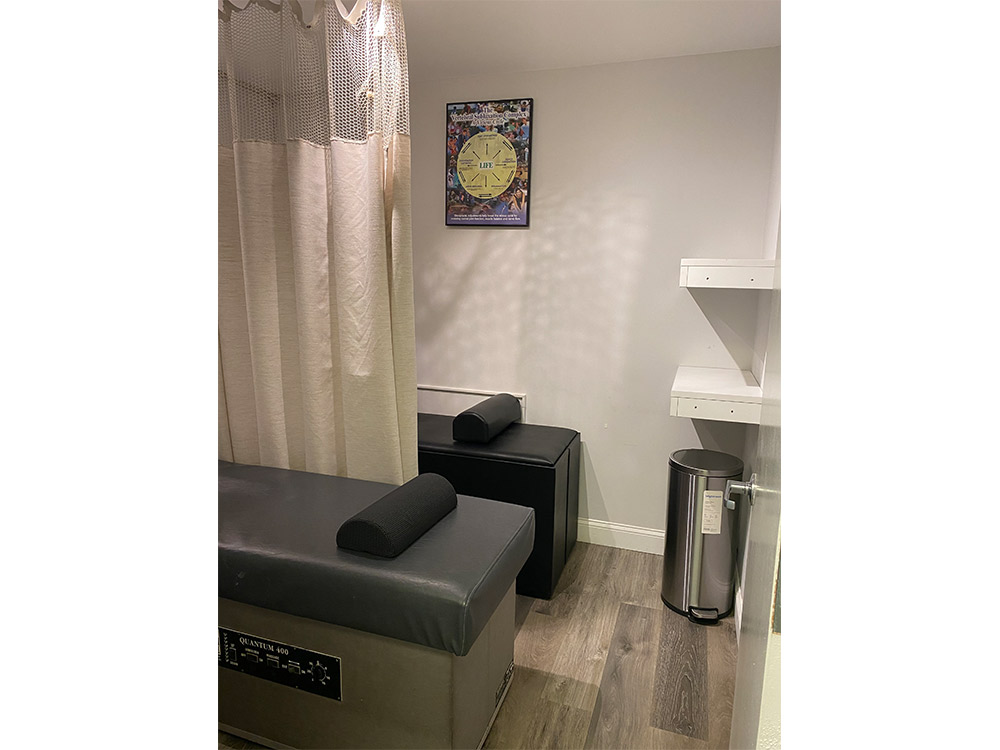 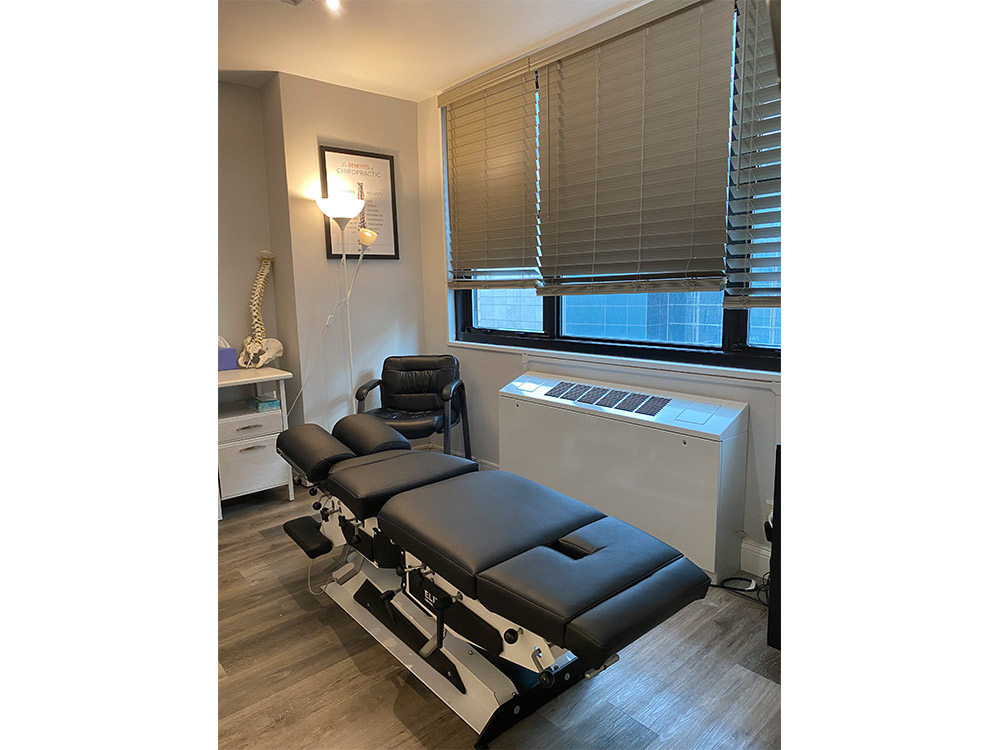 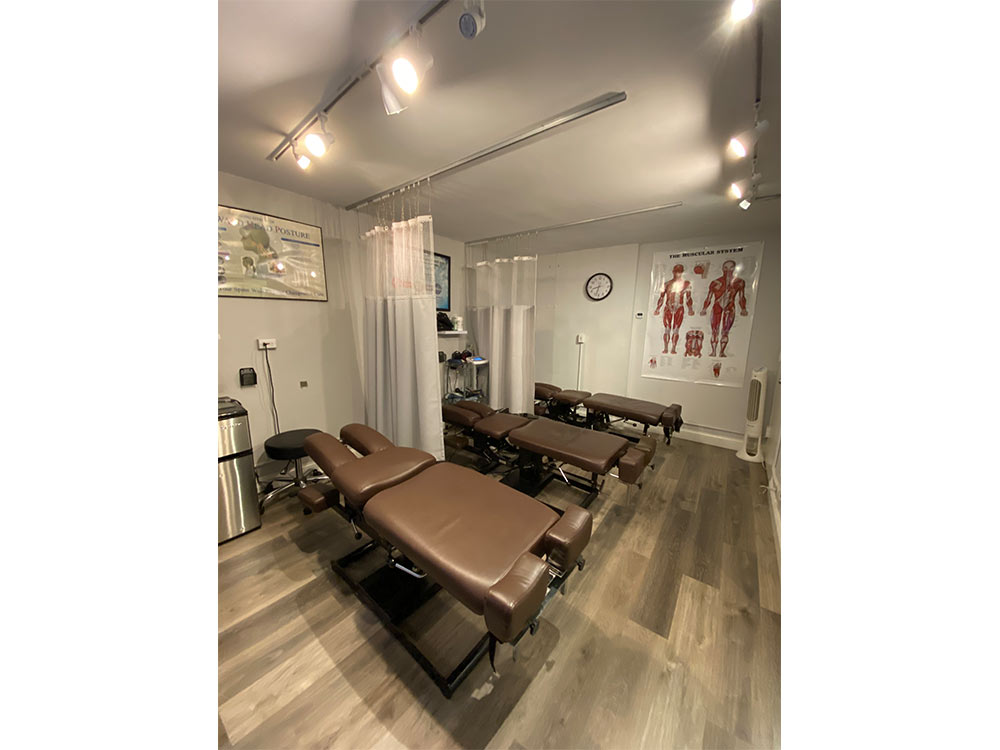 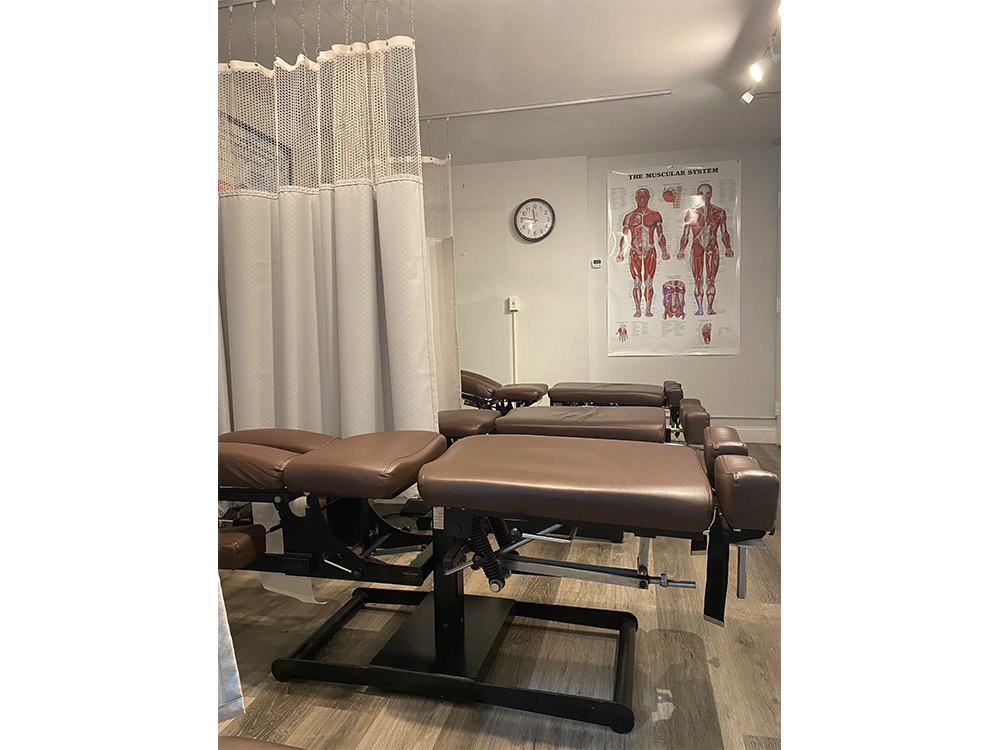 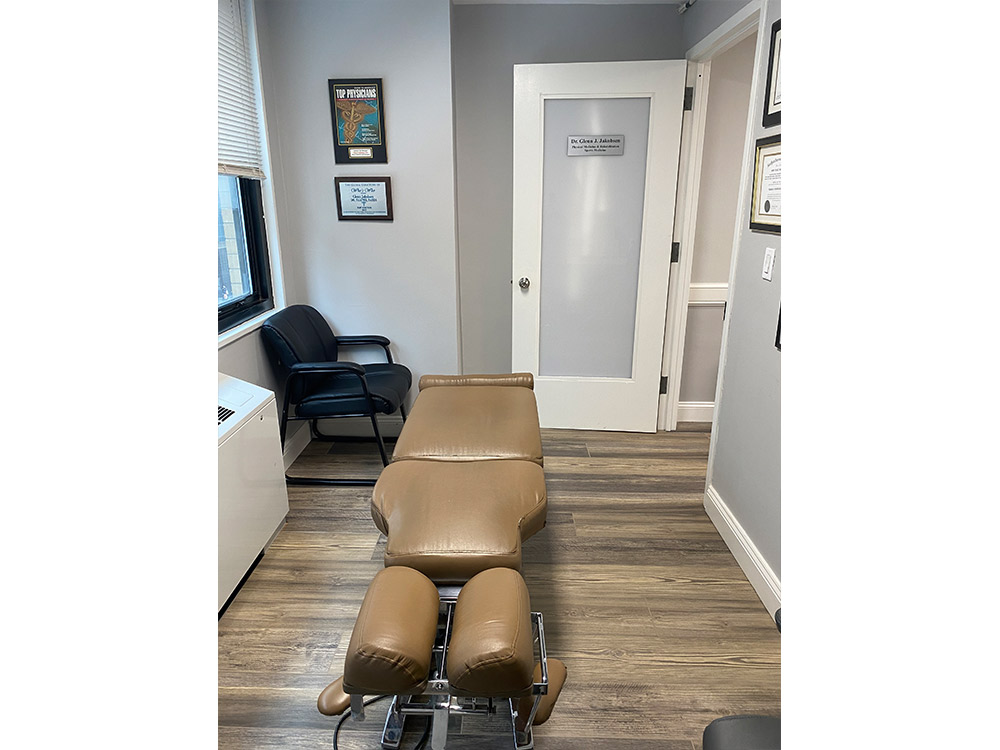 Contact West Side Comprehensive Chiropractic to request an appointment or to request additional information about our services. We look forward to hearing from you.